Boss and Crew LIVE!...As you now know, we are in the final stages of our own LIVE Cam Network.  What this means is we will launch the LIVE cams as we did the movies in 2002, with Matt and me, Carlo.  The thought of LIVE Cams never interested me unless I could make it better, or different or in other words, in true Muscle Mafia style. The Muscle Mafia has become the authority on muscle worship but I didn’t  invent it; I just re-invented it and created a distinct unique brand.  I believed then that something was missing in this genre and the story of muscle worship and male sexuality as it relates to the alpha-male and discrete sexual encounters was being told all wrong.  I believe it lacked masculinity and was being butchered by cheesy gay porn.  What I knew of in real life wasn’t being portrayed, it was in my opinion, sloppy. From your emails and comments over the years, you agreed.  But more than your comments have been the contributions to The Muscle Fund, which tells me you believe in this organization and what it stands for. So much thought has gone into this next expansion phase of The Muscle Mafia and musclematt.com.

It's Time...So over the years I toyed with it, and have had requests for live cams which, in addition to The Muscle Fund, was a good way to raise funds to grow this community.  However, it was kept to private requests and some word of mouth, very limited very private.  This has been done through Skype, “themusclemafia” and will continue to be on a limited basis until our own network goes live.  Some Cam Buyers have been meeting with us for years!  Regular standing appointments, one on one with me or Matt or both of us. This evolved and branched out into many different things that would take place live.  While the idea of just another cam network absolutely turned me off, what emerged was something far beyond cold, soulless camming. So I evaluated all the Skype meetings over that last few years, and the loyalty of those that have been camming with us all this time and realized this is something I can sink some time and money into.  I felt some of you were missing out on what was happening, so expanding the community to give you a more intimate closer look inside The Muscle Mafia would be interesting.  We have enjoyed getting to know the few we have been camming with so the experience is mutual. So this will be a look inside The Muscle Mafia and the crew, we will launch with The BOSS CAM LIVE and special broadcasts of Blessed Events from The Crew Condo (read about it).   We will start home, right here with myself, Matt and select crew members and branch out from there. 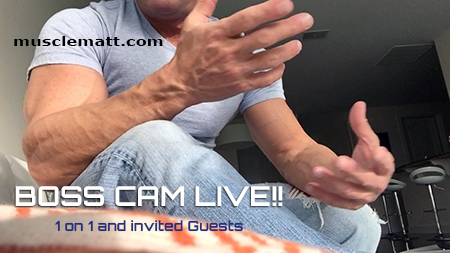 One on One with The Boss!… Words with the Boss, I enjoy some standing appointments on cam with some who just seek advice or may want to talk about their own personal muscle worship experiences.  Others just need someone to talk to about friendships, or life, some want to hear never told behind the scenes stories and back stories about certain Crew and drama that has taken place off camera.  Others get a little more intimate, on occasion I have invite other crew members or even a cock sucker to join me on came and just let it happen.  I have had ongoing special cams with Brad, and have even invited Anthony to join me on a few.  But ya never know who I might invite in next!

Extended Crew, Expanding The Family...The possibilities of imagination combined with technology is making more things possible.  The concept of what we will be calling our Extended Crew, or “E-Crew”.  For everyone of us here, there are at least 1,000 others like us out there.  I have emailed, text and spoken with some and have kept them in mind for future films.  Jocks, bodybuilders and athletes from all over the world who not only would love to join The Muscle Mafia, but who by my own standards are worthy of a spot on The Crew.  Unfortunately, geographically it isn't always possible.  Some were in the Military, others in college, others just wouldn’t be able to explain a trip to New York, so certain circumstances made it difficult to have them come here.  Location yes, but budget another, The Muscle Fund can only afford to bring a certain amount of guys here.

Once we launch, and get everything fully up and running by 2015, just a few weeks away, all these guys who are missing out on being part of The Muscle Mafia will eventually be able to join The Crew remotely as E-Crew through webcam on our network.  They can now be part of The Muscle Mafia and will only be limited by their own ambition as to how much money they would like to make with us.  But of coarse, like every crew member that has ever been in front of my cameras, E-Crew will also have to be hand chosen and cherry picked by me.

For more information about scheduling a cam or becoming part of our Extended Crew email me carlo@musclematt.com 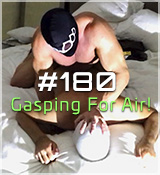